Of course, I don't really have a ton of projects to show off either. I think I have another apron and a nursing cover to show off. I need to make a few more nursing covers for about to pop or just popped cousins.

I'm officially a student again - I started my first class the other night. It's the generic college 101 that you might find on any college class. I've taken my first quiz and got an A! :) Go me! My other two courses, Intro to Psych and Basic Algebra start in June. I know those two will be much tougher, but hopefully I can pull out some A's in those classes as well. My fall semester is shaping up to be a busy one - I'll be taking Chem, A & P, Intermediate Algebra and Intro to Soc. Right now, I'm trying to take everything online - so all my summer courses are online. My fall courses are online, except my A&P, A&P lab and Chem lab.

I'm hoping that I'll be able to finish all my required courses so that I can apply for the nursing program after next summer. Hopefully, I'll only then have to wait a semester - which is what the wait is currently rumored to be.

The kids are great! Nora is looking forward to turning three and going to pre-school in the fall. To that end, she's been doing some potty learning (I am not so into calling it training, since I train dogs, but I teach my kids). Most days we have just one accident and she's getting really good about telling us when she needs to go. She's so proud of herself when she sees how proud we are of her. And who wouldn't be proud? And thrilled - she's been just in disposables for some time as she outgrew the cloth diapers she was in and I didn't want to have to invest in the next size up. News flash: I probably could have outfitted her in the expensive Goodmammas for how long it took to get to this point. Ooops.

Along the way, we have learned that diapers are expensive! We therefore, do not buy name brand. Walmart generic diapers are not good for movers. They're okay for little babies that do not move though. Walmart then had a brand called White Cloud that were good and cheap. Only, they discontinued them. :( One week I noticed Walgreen's had a sale on their diapers - BOGO, which was 2/$9! Holy moly, that was a good price, way under Walmart's cheapies that suck. So, we bought some, and we like them! We now stock up on them whenever they're on sale. :) Which is often - so that's another bonus to them. We also tried Target's new generics in there - they're awful. First, we bought them for Josh (we do have cloth for him but we use disposibles for nighttime, and when we just can't keep up with the laundry). So, we bought him some size 3's. He's a perfect fit in size 3's in every diaper, except Target's. They're HUGE. And they have no elastic in the back, so I'm sure you can imagine how blowouts happen with my mostly BF (we've introduced some solids) little baby? Yeah, not good. Anyways, they're so huge that we noticed that they were as big as Nora's Walgreen's diapers. So, yes, they were both wearing the size 3s (though, admittedly, they were a little snug on Nora). I hate diaper shopping at Target - no matter which kid I'm shopping for, they don't have that size diapers. Seriously, they only had the size 3 in a BOX (I buy the smaller packs as they're usually cheaper). They didn't even have luvs (though, who likes those that smell like baby powder? NOT us.).

As for Josh, he's close to twenty pounds now and has begun to enjoy some fine foods. He's had several mommy approved foods and I'm sure some Nora approved as well. Bananas seem to bother him, so we're holding out on those for now. He's been crawling like a professional for about a month or so now, probably closer to two. He's pulls himself up with ease along anything with an edge and couch cruises. He finally, finally cut his first two teeth - bottoms. He's been drooling and chewing on anything since three months, so we thought he'd cut them early like his sister (she cut her first one around five months). Nope, 8.5 months for him!

Sean has a second interview next week, so wish him luck! :)
Posted by Jennylou's Projects at 10:01 AM 1 comment: Links to this post

This is the apron that I wore today. I really like it - the print is great. :) 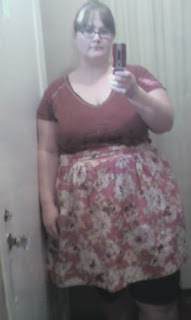 I'm leaning on the door because the sun was shining brightly through the three little windows and was washing everything out otherwise.
Posted by Jennylou's Projects at 3:27 PM 2 comments: Links to this post

a tale of two aprons

This first apron was made with some scraps that I have on hand. I love, love, love the print. One of the local JA's still has it and I should think about gobbling it up before it's all gone. 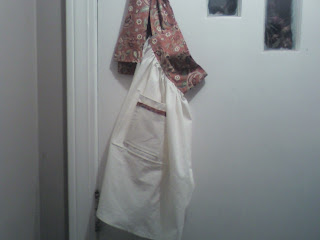 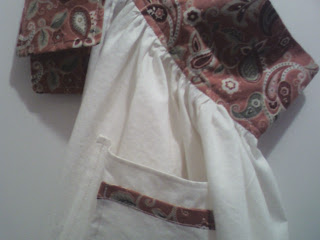 The next apron is a swap that I participated in. I found this great sheet that was screaming to be made into an apron, so here it is: 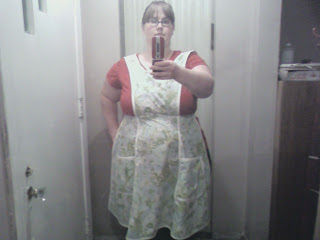 This is a close up of the sheet, before I cut into it.... 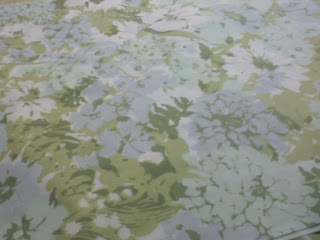 I really need a new camera - these cell phone pictures just don't do justice to these fabrics and aprons!
Posted by Jennylou's Projects at 9:26 PM No comments: Links to this post

Fun at the park

Spring is finally here and we were able to use some of our tax return to get a new (to me) van. It's actually a 2001, which I know most people don't think of as new these days, but I'm thrilled to have transportation again. :)

So, in honor of it being nice (it's 64 today), I took the kids to the park. Josh slept - which isn't unusual for him, he is a great napper and sleeper! Here's Nora on the swings - she loves the swings: 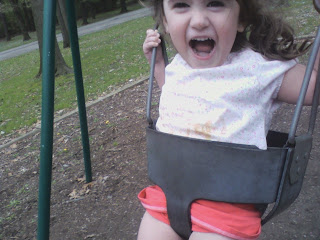 Sorry about the long absence....I really need to update my blog more often. :)

I'm working on kitchen curtains, here's one all done and hung: 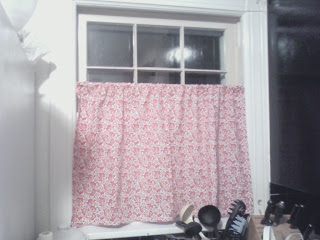 And, a closeup of the material: 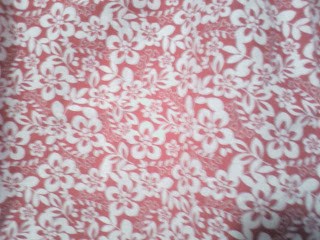 Sorry too for the crappy cell phone pictures.
Posted by Jennylou's Projects at 8:34 PM 2 comments: Links to this post